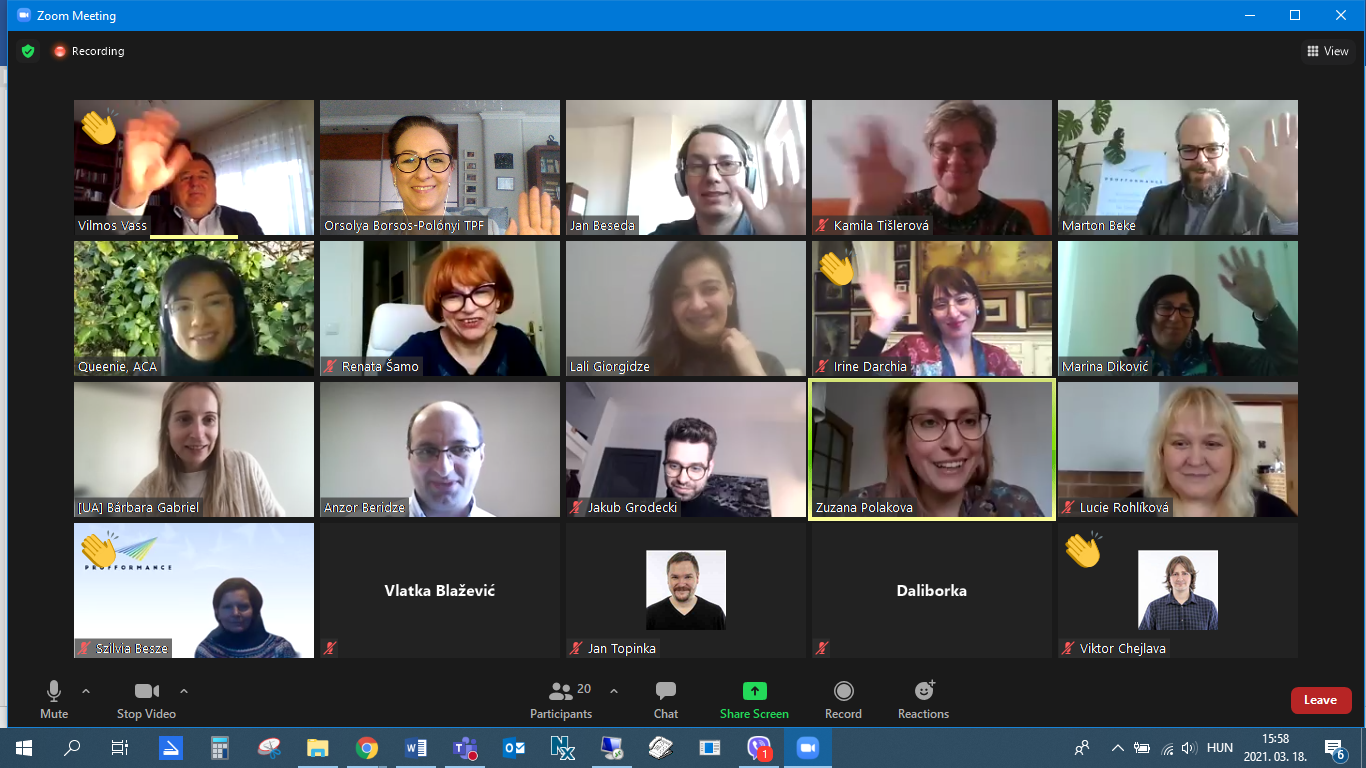 The process of creating an assessment tool for the higher education teachers reached a new phase with a Peer Learning Activity organised in March 2021. The PLA was a 2 day event held online in Zoom platform (instead of the originally planned venue, Prague), the first day took place on Thursday 4th March and the second on Thursday 18th March.

The organizers were the Czech consortium partners: the Ministry of Education, Youth and Sport of Czechia and the Czech National Agency for International Education and Research.  The main contributors were Jan Beseda (Centre for Higher Education Studies), Zuzana Poláková (Ministry of Education, Youth and Sport) and Lucie Rohlíková (University of West Bohemia), Daliborka Luketic (University of Zadar), Vilmos Vass (Budapest Metropolitan University), On both days nearly 30 experts took active part.

On Thursday 4th March PROFFORMANCE experts discussed the role of Horizontal Aspects: Digitalization, Universal Design and Internationalization. The event started with Vilmos Vass and Daliborka Luketić, who presented the results of 1st PLA. After that invited experts talked about the horizontal aspects in teacher’s perfomance. First, Stefania Bocconi (National Research Council of Italy, Institute for Educational Technology) spoke about the project SELFIE, which is focused on digital competencies of teachers. Terry Maguire (Director of National Forum for the Enhancement of Teaching and Learning, Ireland) presented the aspects of the Universal Design in higher education. The DIGI-HE team (Alison Morrisroe, Policy and Project Officer, European University Association, Airina Volungevičiené, Director of Institute of Innovate Studies, Vytautas Magnus University and Mark Brown, Director of National Institute for Digital Learning, Dublin City University) gave a lecture about their project, which inquires the role of Digitalization in higher education teaching and learning. Finally, Uwe Brandenburg (Global Impact Institute, Czech Republic) pointed out on important aspects of Internalization in higher education teachers’ performance.

Small working groups were organized and worked both synchronously and asynchronously  on their part of the Competency 2D Matrix until 11th March. Group A was dedicated to Digitalisation, Group B tested Universal Design and Group C was responsible for Internationalization.

Working groups were organized again maximum 7 persons in each, working on their own Competency Matrix 3D Structure till 25th March. Group A was responsible for Teachers-self / Teachers peers’ assessment, Group B tested External Stakeholders contribution and Group C was dedicated to Students/HEI management.

The content of this webpage represents the view of the author only and is his/her sole responsibility. The European Commission and the Agency do not accept any responsibility for use that may be made of the information it contains